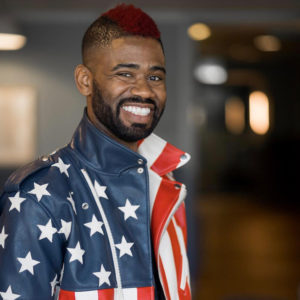 The Marine Rapper served 10 years as a war reporter with infantry battalions during his deployments to Iraq and then Afghanistan. He earned a combat action ribbon in Iraq and an award for combat photography during the same firefight.

TMR has been featured on: CBS Radio, Apple Music, Verizon, Vet Pivot, To The Point, We Are The Mighty, and Range 15 Movie Soundtrack. The Marine Rapper has performed at the House of Blues Vegas and hosted numerous live shows nationwide.

The Marine Rapper music recounts his military service, which can be sometimes humorous, over Heavy Metal, Hip-Hop, and trap production. TMR strives to motivate others, start conversation and immortalize his fallen brothers and sisters in music.

The Marine Rapper is the CEO of the Military Musician platform and owner of Ninja Punch Music. He is now the host of Military’s Got Talent.