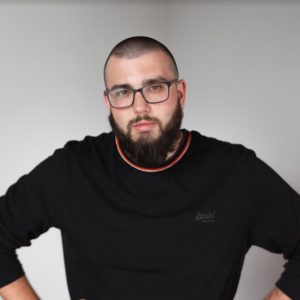 Sam Saideman, Co-Founder and CEO of Innovo Management, LLC, directly manages acts such as Sammy Adams, YONAS, danny G, Sansol the Artist, and Sam Johnston, driving the company’s vision and success since its inception. With experience that ranges from performance and booking to publishing and marketing for a global distribution company, Sam has a wealth of experience that he leverages in his daily management strategies.

Sam has directly created, implemented, and managed label budget for marketing campaigns on projects that include Method Man, Travie McCoy, CeeLo Green, Cherub, and more. In 2015, 2016, and 2019, the Nashville Chamber of Commerce and Nashville Entrepreneur Center nominated Sam for Young Entrepreneur of the Year, following awards and recognition from President Barack Obama and Nashville Mayor David Briley for his work in the community and execution of successful benefit concerts. Sam also recently joined The Recording Academy as a Professional Member and was written about in Forbes Magazine.

While Innovo has experienced over 200% year-over-year growth, the early days of the company and Sam’s discovery of his business acumen are what defines his entrepreneurial journey. As an immigrant from London, England who moved to New York in 2001, his lower-middle class upbringing taught him early on that there’s no substitute for hard work. By the age of 18, Sam had worked in real estate, property management, door-to-door sales, marketing, and any other educational opportunities that he could get his hands on. Living in an environment like New York, Sam was simultaneously immersed in the culture of Hip-Hop, and switched his focus away from general business towards the music industry as an artist. At 19 years old, he had signed with an independent record label in Philadelphia. After being promised the world, he was given nothing, resulting in a legal battle over his work. At this point, Sam discovered his true passion; providing a place focused on fair treatment and artist centered career development. 1 year later, along with his business partner, Ian Rodriguez, Innovo Management was formed.